Dance into the dark.

There’s no better time for a cigarette than when you’re waiting for a train, because smoking’s a thing you do alone, like traveling. Even if you’re traveling or smoking with someone else, you still do these things alone. It’s a way to say goodbye to a place. Taking the last drag and snubbing the butt out under your toe—it stamps a period at the end of one chapter and pushes you into the next. It’s a comforting ritual, espe- cially when you’re traveling, and every day is a goodbye in one way or another.

Jason and I picked up together in Prague. I was hanging out under the departure board, waiting for the tracks to be called. There were always at least a dozen of us sprawled out, like a camp of sleeping camel drivers, laid up against our packs. Jason was the kid closest to me, and after a while he called over and said, “Hey man, you speak English?” He needed to take a piss. He asked if I’d watch his stuff, so I did. And that’s how we picked up together.

You learn a lot about a person when you travel together by train. Something about the click-click-click under the wheels that reminds you you’re in motion, that you’re neither here nor there, but in a limbo place where people float, where you can be and say whatever you like.

We confessed to each other how we hated being away—how the loneliness traveled with you, how you spent most of the time trying to find someplace to cheer yourself up. Neither of us expected it to be like this. We had open tickets but nowhere to be. We could get on a train in one country and wake up in another. That was supposed to be exciting. So how would anyone understand how miserable it actually was? When you leave home, no one tells you about this side of it. No one tells you that freedom can be harder than any routine, that it greets you every morning with the same question. Where are you going? And every day you have to reply, I don’t know.

Jason told me about his girl in Philly who was be- tween semesters, and how he was sick of talking to her on the phone. It was costing him a fortune, and each conversation ended in a fight, because they missed each other, and they were going out of their minds. Jason asked if I had a girl, and I thought of you, and then I said no, I don’t.

“Six more days,” he sighed, resting his head back into the hood of his coat. “Just six more days.” And then he pulled his earphones up and closed his eyes, and I watched him sleep.

The train pulled in under the lights of Hauptbahnhof Sta-tion, and the air brakes fired, and the doors clapped open.

I nudged Jason’s leg. He looked around, rubbing his eyes. “Munich,” I said. We pulled down our bags and gave them a shove onto the platform. Other backpackers walked past and we nodded to them as they went by, the way truckers do as they pass each other on a highway. I looked out over the bay of train platforms, and I could see just how many of us there were—dozens, from every place—and I thought the sight should make me feel better, like I was part of a special club. But there was something about the way we looked—bundled beneath our packs, strapped into our gear like astronauts on a space-walk—that made me feel lonely for all of us, even as we walked together.

I told Jason I had to make a call.

I’d been having my mail forwarded to Morgan’s flat in London, and I’d been trying her for the past three days to see if anything had arrived. But all I ever got was the answering machine, and tonight was no different.

I felt like I needed to do something, go somewhere, keep moving, to Frankfurt maybe. Someplace that actually had something going on at night, someplace you could lose yourself in a crowd. I thought about telling Jason this, but he had already smacked his finger down on the map, tracing a route from the station to the hostel, and when I looked at all of our stuff piled up on the platform, I thought about having to hoist it back onto a train that wouldn’t leave until God- knows-when, and suddenly Munich seemed fine for now. But that was before we’d arrived at the hostel.

At this point, I’d gotten used to a bare minimum of comfort, institutional at best. Most of the hostels attempted to round down the corners. Not this place. This one had been converted (a term I use lightly) from a public high school into an overcrowded way station for young, transient souls. Little had been done to conceal its former identity. Desks had been pulled out and bunk beds hauled in—and that’s about it. I peered into the reclaimed classrooms as we marched down the halls, remembering daydreams I’d had as a child—about what it would be like when the nuclear bomb hit and we had to live in our candlelit classrooms, eating thawed-out pizzas and marrying each other.

Our room assignment was the shell of a faculty office, shared by a couple of American girls, Sarah and Kim, who had already toppled their belongings onto the bunks opposite ours. They made for an odd couple—Sarah had the body of a point guard, and Kim was short and curvy and wore a pair of cat’s eye spectacles. They were cute, not blindingly attractive, but whatever they lacked in sex appeal they made up for in openness. I was impressed that they didn’t seem to care about sharing a room with two boys they’d never met.

“We’re going dancing, if you want to go,” Sarah said. “I grabbed these from downstairs.” She handed Jason a stack of party flyers, which he sorted through like a deck of playing cards. They were all selling the same thing. A hundred different DJs with a hundred different obnoxious names like DJ SPIT and MISSY KISSY. All of them would be spinning either “house” or “trance,” and I knew deep down in my bones just how annoying any one of these parties would be. But at this point it wasn’t about the party. It was about having a destination.

“What about this one?” I asked, looking over Jason’s shoulder. I read the name aloud. “Nachtwerk… What is that? Nachtwerk. Night work?”

“I’m looking,” Jason said, tracing his finger across the map. “It’s not on here.”

That should have been our first clue: The name of the street was there, but way out in the margin with an arrow pointing off the page.

The thing about trying to find your way around Munich is that it doesn’t stick to a plan. It’s one of these ancient municipalities that began life as a toll bridge and eventually blossomed into what we imagine when we think of a classic German city—Bavarian clock towers, gingerbread buildings, and the husky smell of beer halls at lunch time. Basically, if all the characters of a fairy tale—the gnomes, the tree-people, the talking mice, the gentle dragon—suddenly had to get their taxes done, they would all join hands and mosey off to Munich. The tediousness of the real world lives beyond the frame of the city’s postcard-self, and beyond that, the hulking shadows of industry—behemoth warehouses and soot-covered smokestacks, marching off into the night. This is where we found ourselves after a half hour of walking, on the edge of the final ring of civilization, a place where buildings no longer had address numbers. They were simply too big, old and dirty to require one. It was the kind of place where you could light a garbage can on fire just because it felt right. This is what the world would look like if everyone died at once, I thought.

Jason took another look at the map. Apparently, we were still headed in the right direction, and we’d come too far to turn back. So that left us with only one option: to soldier on in a searching, disgruntled silence. Finally, someone let up a cry. “Look!”

There, out on the cinder-block horizon, hung a single word scrawled in pink neon against a black velvet sky—

We moved slowly through the steel gates, a kind of detainment camp for kids dressed in parachute pants and half- hoodies. No one knew how much it cost to get in. The girls thought they saw a sign for 40 Deutsche mark, and I imagined what 40 Deutsche mark looked like in all of its incarnations—a decent meal, a better room, a phone call home—and then I forked over the cash and was ushered into the cavern.

The club was the size of an abandoned airplane hanger—an assemblage of girders and I-beams forming a shadow-web above the pulsing strobes and the light guns that traced geometric patterns across the scuffed black dance floor. The bar stood off to one side, an island of hammered steel, manned by a team of bartenders dressed like space colonists in silver tops and glittery eye make-up. Self-conscious teens huddled about, hoping they looked good, assuming they didn’t, and not drunk enough to actually dance. Sarah and Kim had already wandered off, ordering at the other end of the bar. I wondered if they were going to want to hang out, or if they thought people would assume we were together and ruin their chances of hooking up. So I left them alone.

I paid for my beer, leaving Jason to flirt with the bartender, and I wandered out under the kaleidoscope of lights.

Just then, a whole tribe of young punks in soccer jerseys came hustling in, followed by a gaggle of teenage girls. The girls seemed to be everywhere at once—racing from the bar to the bathroom, from the DJ booth to the coat check, grabbing one another, screaming to each other in German, elated about who knows what, until the volume of the thumping bass drowned out everyone and everything.

A techno anthem had come raging in, and all of the girls shrieked as if this was what they’d been waiting for all night. They clasped hands and dragged each other onto the dance floor. One by one, the soccer boys joined them, setting down their beers, finding their two-step rhythm under the lights. And there I stood, in the center of it all, waiting for the next song to come in, and the one after that. I waited for a song I knew, one with wings powerful enough to swoop down and carry me away—up over the crowd, the city, an ocean, home.

But that song never came. It left me there, in a steel cave, with laser lights flashing and speakers churning out relentless beats. And as the dance floor began to fill with smoke, the people began to disappear within it. I felt my throat start to close. And then my hands were in front of me, moving, pushing, grasping my way through the crowd, out one of the side exits, into the parking lot, not looking back as the metal door clamped shut behind me.

Ok so we got a lot going on here. #upstateny #arti 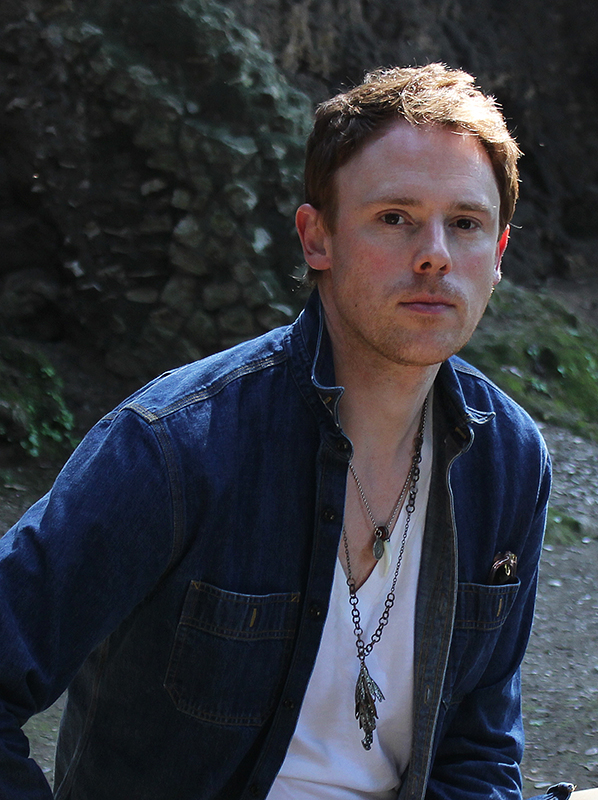 Sparrow Hall is a writer, producer and researcher based in the Hudson Valley. His work explores our personal relationships with the unknown—examining the mysterious link between exploratory science, spirituality and the paranormal. Full Bio >